We were chosen to blog about the Harlem Globetrotters, as you saw from the last post I gave out a discount passcode and was given tickets for the 5 of us to attend. Faith happened to be down from Vegas, but I didn’t know she would be, so she didn’t participate as I only asked for the 5 tickets.

We hit a great deal of traffic on our way down, so even though we left early to get dinner, we were unable to. When we arrived at Pechanga Arena, we had to pay 15 dollars to park and were directed to the other side of the lot to Will Call to get our tickets.

Once we got our tickets, we headed inside but were told we could not bring our camera in because the lens is detachable, thus making it a “professional camera” according to security. When I explained that I was blogging about it and wanted some good photos, I was told to use my cell phone, so we did, and please excuse the quality! We all took pictures and enjoyed the show! 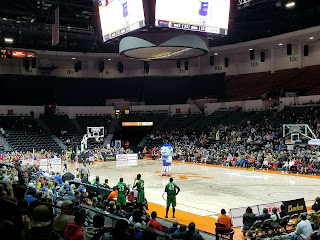 In the early part of the game “Globie” came out, and I don’t think we laughed harder during the entire game. One of the funniest things to me is that when Sean laughs, he cries (just like his mom, isn’t that sweet?) So, lots of laughter and tears when this blow up head and body Globie came out and fell several times, deflating itself and walking as though it had no legs, then growing legs and walking normally until it dropped again! Hilariously funny!! 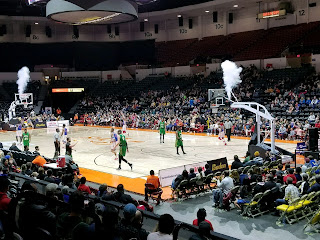 Each time they made a basket, not only did the score go up exponentially, but the backboards blew smoke or steam into the air. That part made it ever so exciting for us, and we all cheered a little more because of the excitement of the steam! 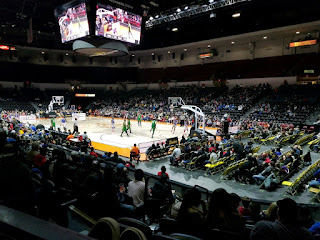 The Harlem Globetrotters played a team called the Generals of which I later learned they play every time and have only lost to 6 times since their inception and not since the 1970’s have they lost. When it last happened, the Globetrotters were playing around and having fun after getting a huge lead, which they ended up losing by messing around so much! 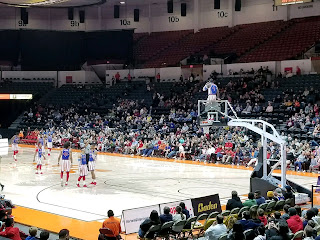 Speaking of messing around, this guy got up on the hoop and sang baby shark making all the hand motions and all, it was so funny! 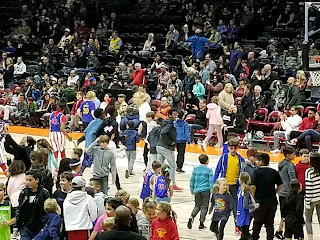 At the end of the game, many of the kids ran down to the court and formed lines where the Globetrotters signed basketballs and merchandise. 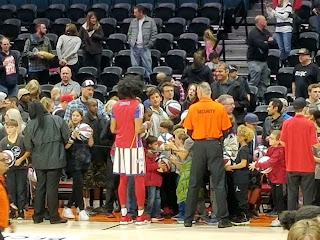 Of course, my son had this player nicknamed “Moose” sign his shirt! 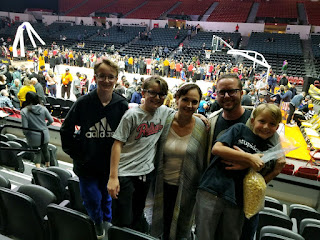 Here we are happy after laughing throughout the game with full bellies from eating pizza and popcorn we purchased at the game!
The Harlem Globetrotters are something everyone should see and take their kids to see. I remember seeing them as a young child and loving them so much which made it even more exciting as a parent, knowing my children will develop a love for them just as I have!
Yet another thing checked off our Family Bucketlist!