This year, Josh is at a different school (Middle School), which happens to be in a different district for our Encinitas schools. Sadly he has a different schedule that the elementary school and only had one week off for Spring Break instead of the two the elementary school has. So we decided to take our motor home up to Yosemite as that is one National Park we have not been to and it’s in our own state and I have always wanted to visit it! On our drive up as there wasn’t much to see on the 5 freeway heading north, we played Clue several times as well as the game of Life. The boys played and then I joined them. Anything is better than fighting kids and my kids love board games!! 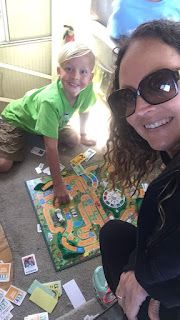 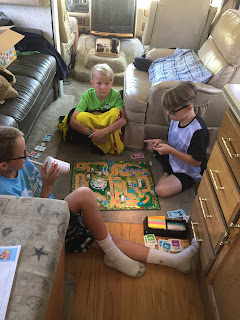 Both Josh and Zach (and hopefully Ben in the future) have had Mrs. Mills for their 5th grade teacher. She used to live in Fresno and puts it in each of her classroom plays, of which she is famous for, in the school. So of course while passing through we had to stop and get a picture by the famous town sign!! My boys thought it was the greatest thing, but not so much the town. Although I am sure it has changed a lot since Mrs. Mills was a teacher there, it seemed like most any big city with all of the local stores, because we had to stop and stock up at Trader Joes. 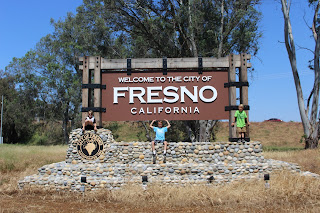 After we arrived in Yosemite, we went to the first waterfall. We did not camp in the park as we only booked the trip a few weeks before and every campground in the park was sold out. We ended up staying just outside of the park on the other side. On our drive in we stopped several times at anything we thought looked interesting. 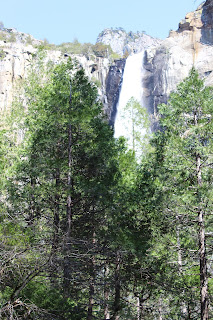 Bridal Veil Falls was our first stop! It was gorgeous, but so very cold for us Southern Californians who are used to warmer weather this time of year. We froze as soon as we hopped out of the motor home and rushed up to a good spot to see the falls. 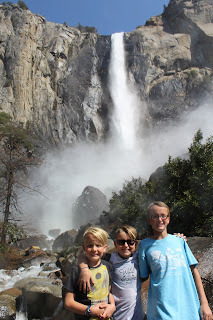 After taking a few pictures closer to the falls, we rushed back down towards the motor home, but had to stop for the snow where after this picture we all touched it. 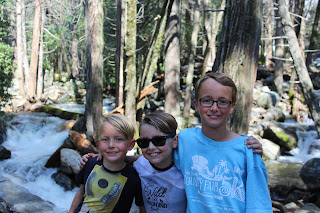 Then we rushed back into the warm motor home and drove off to discover more. 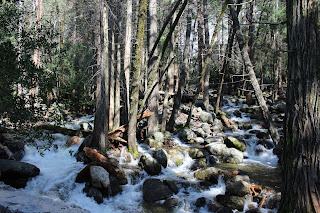 We discovered a trail to Lower Falls and saw much more snow. By this time we all had our jackets on. Lower Falls was a fun, short, easy trail and we were able to see Upper Falls at the same time, but we knew we wanted to hike to Upper Falls another day. 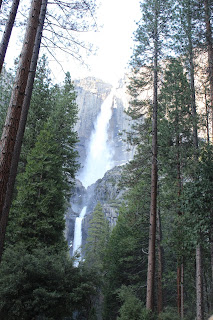 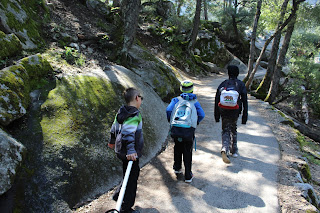 Then we were off to the visitor’s center where the boys climbed into a tree trunk and we picked up their Jr. Ranger books to begin filling them out, so we can learn as we go. 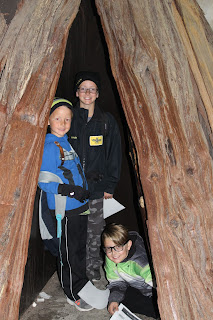 Because of all the rains we have had, there were heavily flowing rivers as well as wet trails and sidewalks. 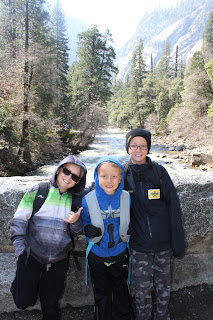 There were many scenic places to take photos in the Park. Next to and over rivers, near water falls, on hiking trails, as well as of all the beautiful green areas and carved out rocks. 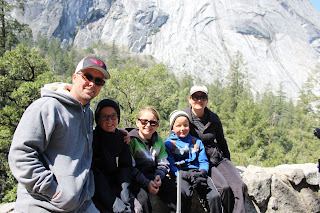 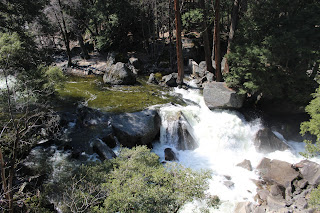 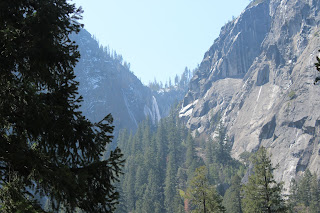 After a day of driving we were pooped and ready to head to camp and get it all set up before the sun went down. 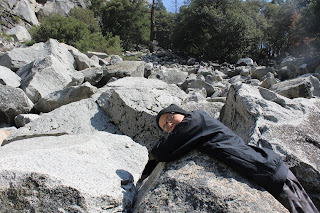