In the past month, I have been to 2 funerals. The first one, for a friend from our brain tumor support group, and the one today, for my best friends aunt. As I sat at the one today listening to what was said about Aunt Sue, I thought it’s such a bummer that she has to miss her own funeral.

I do have my funeral semi planned out in my head. I know I would like the pastor of our church to speak at it and for it to be one that may win souls, because then it seems like my death was worth something. I also want the song “In Christ Alone” played at my funeral (that song reminded me of my grandmother before she passed away). The rest is up to my family. I don’t want my family to feel like they have to speak, because that might be too hard for them. 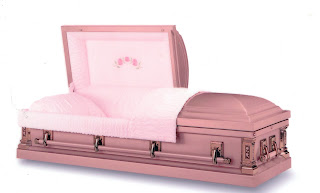 I know I posted a casket picture on here, even though I don’t want to be buried ..but how cool would a pink casket be!!
Back to a mock funeral. How awesome would it be to have a funeral while still living, so you can see who is willing to travel for you and all the good things they have to say, not that I need my ego to be boosted. So many times people only get together at funerals. At today’s funeral Aunt Sue’s daughter was saying that it was all the little things her mom did that made her mom so special. Her mom did little things like put glitter out when the tooth fairy came, etc. It really inspired me to do more little things, because sometimes they make the biggest impression.
If I had a mock funeral, I’d know what those around me really like and I could do them before I die and hopefully leave some wonderful memories. It would be a celebration of life while I’m still living with many of my friends and family gathered around at the same time! It sounds crazy, but I’m thinking about adding it to my bucket list…what do you think?