When we called the RV campground yesterday we were told to park, since we were getting there so late, after 10pm. We didn’t see any late check in and decided to park and check it out in the morning. In the morning we showered, walked the dog, and Sean went to go check out and pay, but no one was there. So we laughed that we slept and left. We will have to give them a call when we get back home to pay for the stay! 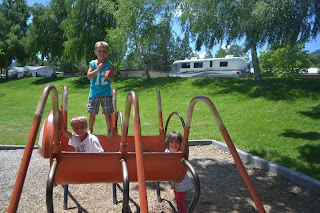 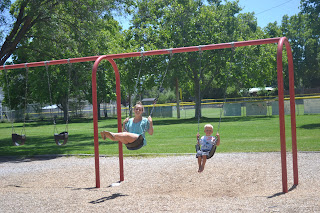 During the day we saw quite a bit of stuff on the road. We stopped at a park to eat lunch and let the kids play. 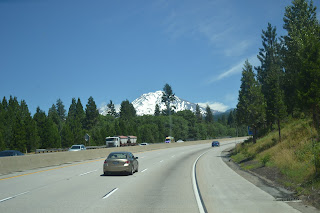 We drove under a train, past some colorful trucks (one was hot pink), drive through Shasta, went through the Siskyou pass, which was absolutely beautiful (and they still had snow on the mountain).
And finally an RV driver waved at Sean, but he didn’t see it!! Only I did! I think he was bummed, because he and my brother had been looking for that. 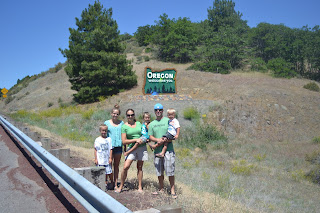 We drove all the way through Oregon and into Washington! My brother, Tyler, a Washingtonian was so proud of the nice Washington sign! 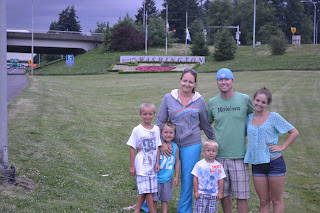 My brother drove some. And so did I, but I can’t take my own picture! My brother ended feeling  a little sick during the day, then I started to feel it. I got the chills, which is why I’m the only one in sweats in the Washington picture. Luckily for both of us, it was a quick bug.

The kids all napped at the same time! 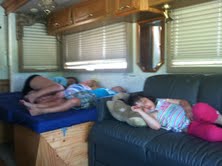 I brought school work for them to do! (They missed some school when I had my surgeries, and Josh really needs to catch up on his math).

We stayed the night at an RV park in Southern Washington for the night. And they didn’t have late check in either, when we called they just said to pick a spot and we’ll take care of it in the morning.