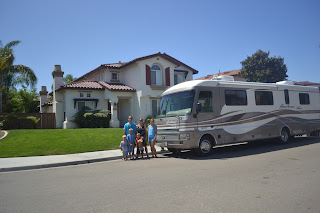 Today we set out on our 7 week adventure across the United States. We left at 11am, earlier than our planned time of noon.
We had a couple of stow–a- ways with us, my brother, Tyler, and his daughter, Bella, who joined us for a family vacation last week. Our trip starts with us driving them home to La Conner, Washington, north of Seattle. Day 1 started uneventful with Sean driving,, and  the kids playing in the back on the motor-home. My brother told quite a few jokes such as “It smells like ‘up dog’ in here” to which I would reply What’s up dog?’ and he would say “Not much, what’s up with you” While driving through Los Angeles, some young boys in an SUV decided to throw an egg at our RV! It  hit the passenger side window and slid back. We saw them throw an egg at a semi truck, which seemed to follow them. They were fast and got far ahead of us I called 911 and reported it. We did end up seeing them later, so I was hoping that they ended up getting pulled over!
During our drive through Santa Clarita, where we lived at one time, we saw a war movie being filmed.
We saw Motorcycle drivers wave at other motorcycles on the opposite side of the freeway. My brother said that when he had an old VW bus, drivers of other VW busses, would wave at him. Then we started to wonder if RV drivers do the same thing.  We looked at other RV drivers and didn’t see any wave at us, even the ones we waved to.. We decided to stop just north of Sacramento at a park just off the freeway. 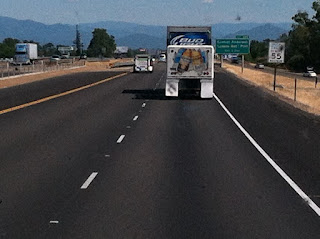 Another funny thing we saw was a bud light truck pulling a Corona trailer.